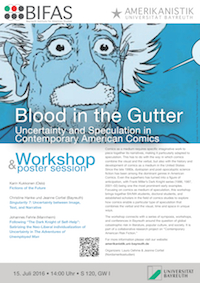 Comics as a medium requires specific imaginative work to piece together its narratives, making it particularly adapted to speculation. This has to do with the ways in which comics combine the visual and the verbal, but also with the history and development of comics as a medium in the United States: Since the late 1980s, dystopian and post-apocalyptic science fiction has been among the dominant genres in American Comics. Even the superhero has turned into a figure of anticipation, with Frank Miller’s Dark Knight series (1986, 1987, 2001-02) being one the most prominent early examples. Focusing on comics as medium of speculation, this workshop brings together BA/MA students, doctoral students, and established scholars in the field of comics studies to explore how comics enable a particular type of speculation that combines the verbal and the visual, time and space in unique ways.

The workshop connects with a series of symposia, workshops, and conferences in Bayreuth around the question of global catastrophic risk in literature, popular culture, and society. It is part of a collaborative research project on “Contemporary American Risk Fiction."

Scheduled at the end of the summer semester, the workshop was the climax of a research seminar that focused on contemporary American science fiction comics. The students developed their own research projects during the semester and presented them in a poster session as part of the workshop. Accompanied by some food and drinks, guests and speakers had the opportunity to discuss the posters with the students in a relaxed and pleasant atmosphere. Subsequently, three talks by renowned comics scholars inspired plenary discussions that top off the event. 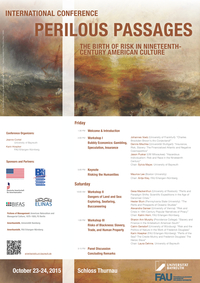 This conference draws attention to the crucial role the nineteenth century played—particularly in the transatlantic North American context—in transforming the meaning of risk and moving it from the margins of particular trade enterprises to the center of social cohesion and individual identity.

For more information see the conference abstract and the program. 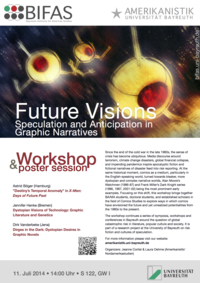 Since the end of the cold war in the late 1980s, the sense of crisis has become ubiquitous. Media discourse around terrorism, climate change disasters, global financial collapse, and impending pandemics inspire apocalyptic fiction and fictional narratives of disaster feed into risk reporting. At the same historical moment, comics as a medium, particularly in the English-speaking world, turned towards bleaker, more dystopian and complex narrative worlds, Alan Moore’s Watchmen (1986-87) and Frank Miller’s Dark Knight series (1986, 1987, 2001-02) being the most prominent early examples. It is not surprising, then, that dystopia has become one of the dominant genres (next to autobiography) in comics/graphic narratives, while utopian visions have virtually disappeared. Even the superhero has turned into a figure of doom rather than resurrection. Focusing on this shift, this workshop brings together BA/MA students, doctoral students, and established scholars in the field of Comics Studies to explore ways in which comics have envisioned the future and yet unrealized potentialities from the 1980s to the present. How have comics tapped speculative genres such as science fiction, utopia/dystopia, (post)apocalypse, alternate history, superhero fiction, and horror to engage with the contemporary sense of risk and apprehension? How has this engagement changed since the 1980s? Has the comics medium developed unique ways of visualizing possible (or impossible) futures in response to present technological, social, and political challenges? What technological developments (nuclear technology, biotechnology, nanotechnology, AI/robotics) have been particularly productive in envisioning these futures? How is the posthuman conceptualized in comics? What role does the superhero, quintessential product of American comics culture, play in these visions? How do these speculative graphic narratives conceptualize gender and race in terms of the future? How are future military conflicts envisioned in comics?

The workshop continues a series of symposia, workshops and conferences in Bayreuth around the question of global catastrophic risk in literature, popular culture and society. It is part of a research project at the University of Bayreuth on risk fiction and cultures of speculation. 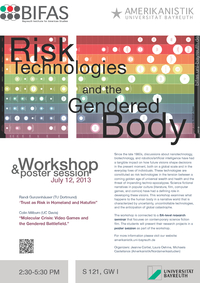 Since the late 1980s, discussions about nanotechnology, biotechnology, and robotics/artificial intelligence have had a tangible impact on how future visions shape decisions in the present moment, both on a global scale and in the everyday lives of individuals. These technologies are constituted as risk technologies in the tension between a coming golden age of universal wealth and health and the threat of impending techno-apocalypse. Science fictional narratives in popular culture (literature, film, computer games, and comics) have had a defining role in developing these visions. This workshop examines what happens to the human body in a narrative world that is characterized by uncertainty, uncontrollable technologies, and the anticipation of global catastrophe.

The workshop is connected to a BA research seminar that focuses on contemporary science fiction film. The students will present their research projects in a poster session as part of the workshop.