January 24 – 25, 2020Conference Center of the University of Bayreuth 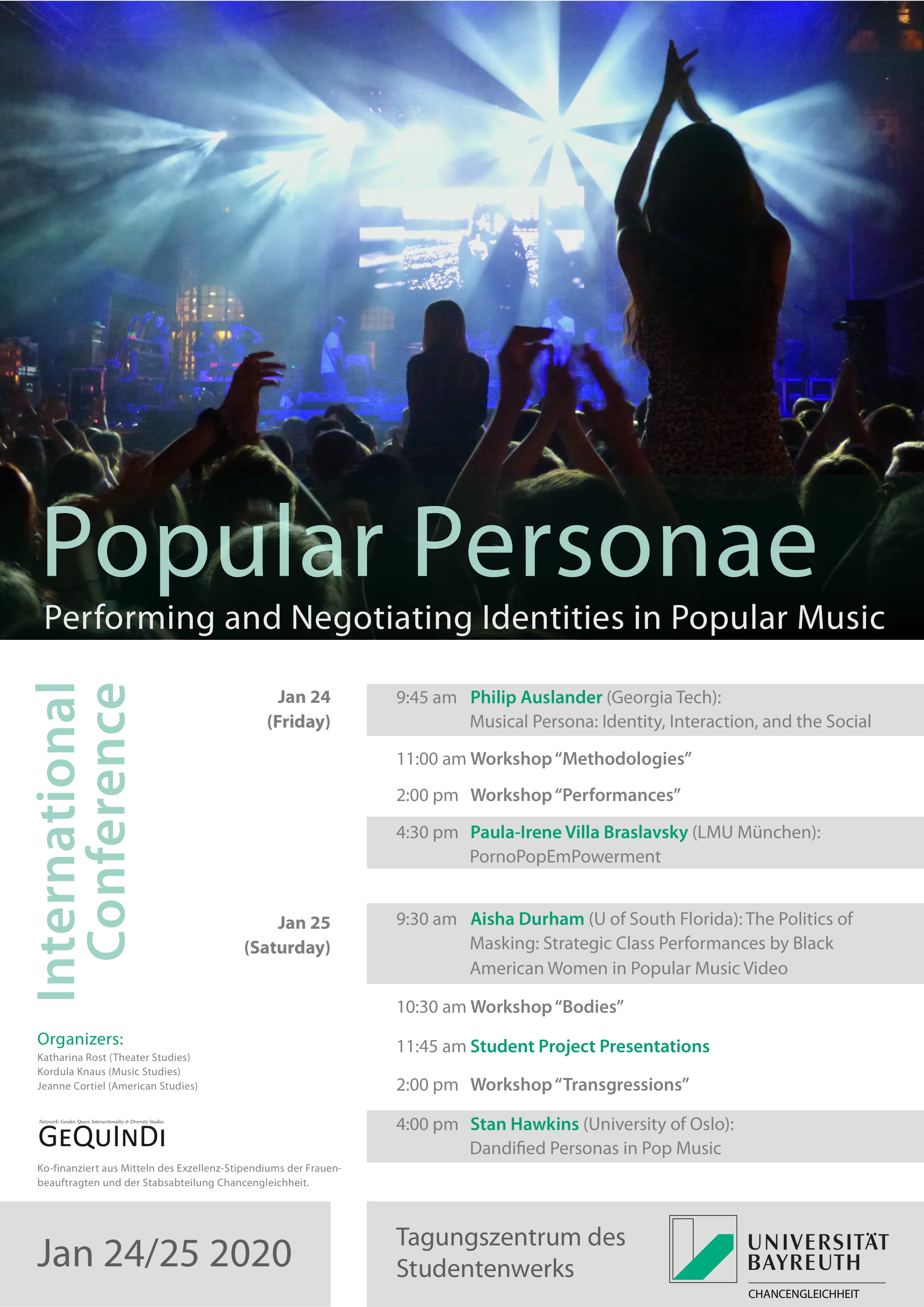 When in the late 70’s David Bowie was asked about his alter ego The Thin White Duke’s alleged fascist character, the pop singer emphasized that this was not his political conviction. Instead, he underlined that the stage persona was an artificial creation: “What I’m doing is theatre, and only theatre. […] I’m using myself as a canvas and trying to paint the truth of our time on it.“1 Similar statements can be found by many other pop artists, i.e. Lady Gaga, Janelle Monáe, Annie Lennox, who thereby highlight pop music’s inherent theatricality. At the same time, many pop stars meticulously take care to appear approachable and “real”, which is supported by the media valuing “honesty”. The relation between theatricality and authenticity is rather complex and touches upon the diverse aspects – economical, historical, social – related to contemporary notions of “stardom” or “celebrity”. In pop music, there is a tension between scandal and convention, between surprise and predictability, and the creation of pop personae often shifts between reinvention and continuity, as well as between commerce and musical ambition or political conviction.

In the mid-2000s, Philip Auslander coined the term “musical persona” by referring to Simon Frith’s emphasis on the performative aspects of the star persona in Performing Rites (1996). To shift the focus to the performative aspects of (popular) music has meant a move beyond the analysis of musical structures and an inclusion of aspects of visual imagery, kinesics, style and fashion histories, a certain popular cultural knowledge and imagination, economics, including as well as a broadening of the methods of analysis (discourse analysis, historical perspectives, gender studies etc.). By creating their persona along the axes of identity categories like gender, race, sexuality, and others, pop singers participate in contemporary sociocultural discourses concerning these aspects. As various authors have emphasized, pop personae are thus not separated from the societies in which they appear, but can be interpreted as comments, projections or spaces of negotiation of sociocultural topics and diverse forms of identities.

Since the mid-2000s, the star personae of pop musicians have become a central subject of popular music scholarship, but mostly in singular studies, articles and theme-related conferences. We aim at bringing this broad scholarship together at our conference in Bayreuth which will be collectively organized by American, Music and Theatre Studies. This conference aims primarily at the intersections, overlappings and the mutual influences within the different contexts in which pop personae can be located.

1Jean Rook: „Waiting for Bowie and finding a genius who insists he is really a clown“, in: Daily Express vom 5. Mai 1976, S.6​, http://herehewentnofurther.tumblr.com/post/22002752207/waiting-for-bowie-and-finding-a-genius-who-insists